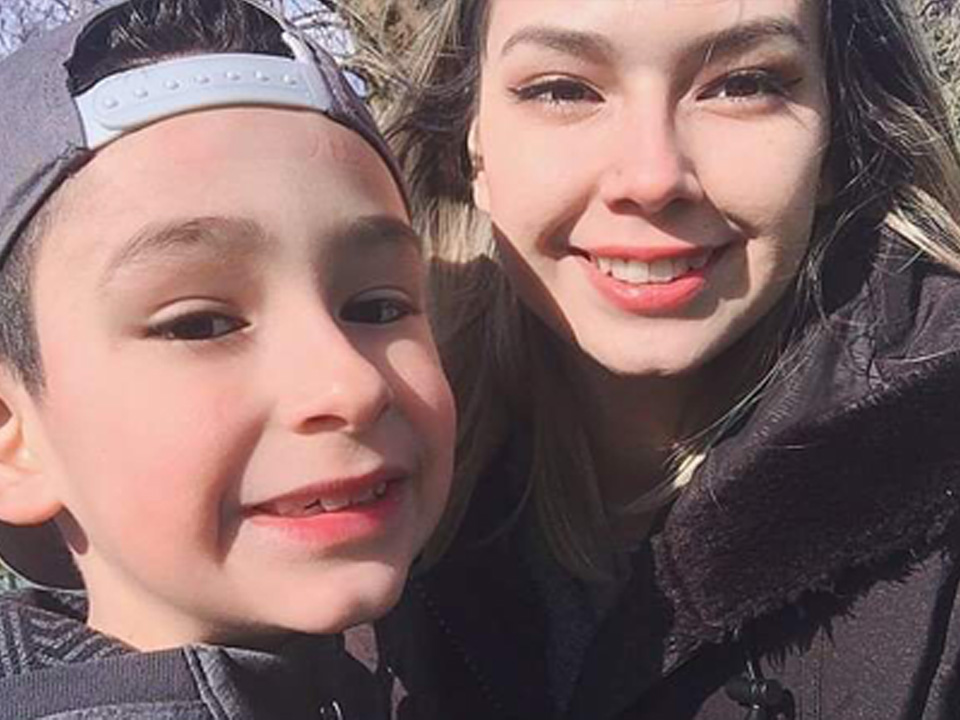 Dianna is a former Aunt Leah’s Place participant, who is now living independently with her son Adrian, and is a real success story. In 2011, she came to Aunt Leah’s House as a single teen mother with her six-month-old baby boy. It was a big transition, “It was a new experience living here with staff and other moms 24/7. I liked it because there was help when I needed it and just being around people that are in the same situation. Single mom. Teenager.” At Aunt Leah’s, Dianna was able to get help with important supports like having staff watch her son, if she needed a break . Dianna also was able to get support to learn how to be a mom and learn life skills, such as learning how to cook and clean . There were also moments of celebration, “Christmas, Easter, all those were fun. Mother’s Day, Halloween, all the moms would come here and past moms – we can all connect.”

Coming to Aunt Leah’s proved to be a turning point for Dianna. As she was able to get the support she needed to move forward. “They were able to help me get back into school. They were encouraging and supportive, and I guess helped me become a better mom with all the stuff they do.” Dianna was committed to building a strong foundation with the daily juggle of taking her son to daycare, attending young parent programs, learning life skills, and just being a parent and taking care of her son. It paid off because she graduated. Dianna recalls how the staff at Aunt Leah’s were invaluable. And what Dianna found most surprising, were all the supports that were available to her and the funding she could access through Aunt Leah’s Place. “I was able to sign my son up for soccer camp and one time I received a gym pass for a year.”

Dianna’s hard work was recognized, winning the Leah Award, which included an education bursary and a laptop. By the age of 18, she moved out, but it was not an entirely smooth transition.

“I thought it was going to be easy, but it was harder.” It has been a slow process, but Dianna says there was light at the end of the tunnel. Dianna’s son Adrian is now flourishing and he is currently attending French immersion school, participating in soccer, and is growing to become a thoughtful person who is her pride and joy. “He’s really hard working. He doesn’t want to fail at anything, so he tries his best, and I have to remind myself to be patient…. He reminds me that life is great.”

Dianna is independent and thriving but remains connected to Aunt Leah’s saying, “Well, everyone who works with Aunt Leah’s is positive and supportive. It’s really supportive, and the environment is really welcoming and warm. I continue to come because it’s a family.” Dianna does not have immediate family living in the province and Aunt Leah’s family model has been instrumental in letting her know she has someone here for her. “If I ever need anything, I can ask.”

“Well, everyone who works with Aunt Leah’s is positive and supportive. It’s really supportive, and the environment is really welcoming and warm. I continue to come because it’s a family.”

Now Dianna is looking at the next chapter with big goals as she is finishing her education requirements. “Education assistant, that’s my goal this year. I think I will finish upgrading by July, and then I can finally start my dreams of being an education assistant.” Dianna is also volunteering twice a week at a kids club, attends Aunt Leah’s on Tuesday’s Cooking club and is primed to become a mentor and role model showing participants what their future can be. Dianna explains, “I want to help young moms too because I’ve been there…I understand.” In the next ten years, Dianna hopes to help children and families by becoming a social worker and giving back, saying, “Hey, maybe I can work at Aunt Leah’s too.”

Special thanks to storyteller and writer, Tami Gabay for volunteering her time and talent to write this story.